This July we commemorate the centenary of the First World War and remember those men who served in the various armies of all nations. Two such men were brothers Thomas and Joseph McEnroe, who served with the Royal Irish Fusiliers, and between them their experience covers the war years between 1914 and 1918. This album was made by Joseph after the war, and documents his experience as a prisoner of war in Germany between 1917 and 1918. It was donated to the National Museum in 1986.

It has only been in the fairly recent past that Ireland has fully acknowledged the role of its people during this conflict; it is thought that up to 150,000 Irishmen enlisted and served in the various theatres of war, and the Irish at home, especially women, found job opportunities on war service, particularly in the manufacturing of munitions. The number of Irish deaths is the subject of debate, some estimate it to be about 35,000, while others include recent emigrants in foreign armies and go as high as about 50,000. It would be impossible to say definitively, as enlistment records do not necessarily state the nationality of the soldier, the Irish regiments were not ‘Irish only’, and individual Irishmen also served in regiments that were not connected to Ireland. Nor do the enlistment forms record the motivation for joining. In 1914 Ireland was part of the British Empire, and about 21,000 Irishmen were already serving in the British Army as professional soldiers. As the war broke out, tens of thousands more enlisted, encouraged by the call to defend small nations such as Belgium. For many Irishmen hoping for Irish independence this was an act of nationalism. Irish nationalist politician John Redmond believed that Irish participation would lead to Home Rule, and encouraged the Irish Volunteers to enlist, causing them to split in 1915 with the vast majority of Volunteers going on to enlist in the British Army.
However, motivations would have been different for every volunteer. In August 1914 this promised to be a short war, and some may have joined as a way to see the world outside Ireland. Unemployment was also very high at this time, especially in urban areas, and many others would have seen a chance to provide an income for their families.

Thomas and Joseph McEnroe were two such men – Thomas being the professional soldier, and his younger brother Joseph volunteering in 1916. They were the only children of the widowed Frances McEnroe of Waterford. In 1901 they were living in Wood Quay, Dublin, and both sons were working as wood sawyer assistants. On 22 April the next year 18 year old Thomas enlisted in the Royal Irish Fusiliers at Armagh, and started a military career. He was posted to India and served there until 1910, when he returned to Dublin and transferred to the Reserves. He took a job as a general labourer in a flourmill and settled down with his wife Susan. On 5 August 1914, the day after the UK declared war on Germany, he was re-engaged and became a Private in the 3rd Battalion, Royal Irish Fusiliers, and was mobilised to France on 12 September 1914. His military records show where and when he was injured. He was at the second Battle of Ypres in April 1915 – the Battle of St. Julien – and would have experienced the first German gas attack using a lethal chlorine gas. Thomas was shot through the pelvis on the 25th and was sent to Crumpsall Military Hospital in Manchester for his recovery. He was eventually discharged on 29 June 1916, aged 32, as ‘being no longer physically fit for war service’.

One month later his 29 year old brother Joseph enlisted as a Private in the 1st Battalion of the Royal Irish Fusiliers. I could find little about his service; it seems his records are among those lost during World War II. Only his medal card survives, so we know that he enlisted on 31 July 1916, shortly after the huge losses suffered by British forces at the Battle of the Somme.

The photograph album he made tells us more about his experiences. He was probably sent to France, and captured sometime in early 1917, as in the album he tells us he spent two years as a prisoner of war in Gettorf, a town near the Danish border. Joseph filled his album with the postcard pictures of the picturesque German town that he sent home to his wife Catherine, noting the post office, the winter gardens and cafes.

There are many photographs of him with fellow prisoners, some posing outside barrack buildings, a football team, and scenes from plays enacted in the camp, all giving an impression of normal life, with the names of the men meticulously recorded by Joseph on the reverse sides or the album page. One particularly stands out for me – the actors on the stage dressed as schoolchildren and their teacher, but the drawn and soiled faces of the prisoner audience in the foreground tell us more about the reality of their conditions. 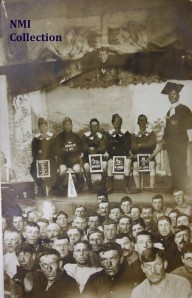 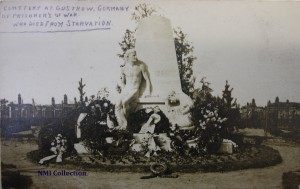 One of the photographs included in this album is of the memorial in the cemetery at Gustrow, dedicated to the prisoners of war who died of starvation. POWs, though they were not generally executed, still suffered bad conditions, forced labour, disease and starvation in the camps. Joseph was probably no exception – his medal record shows he was discharged from service in September 1919, the cause listed as ‘sickness’. 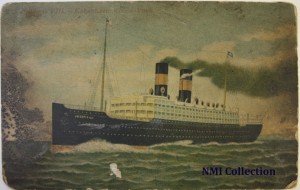 eph returned home in December 1918, one month after the armistice, on the Norwegian liner the Frederik VIII, which had been chartered by the British government to transport their men back from Germany. Though the McEnroes’ story reflects the experience of many Irish families during the Great War, they are unusual in one way – they both survived. At a time when Irish households, and sometimes whole streets, were receiving news of the death of their loved one, Frances McEnroe was lucky enough to have both her sons live through serious injury and imprisonment and return home. 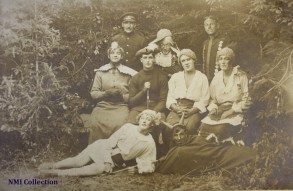 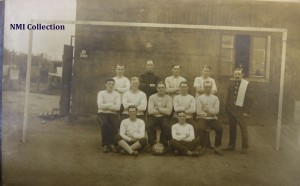 The National Museum of Ireland has a number of photograph albums made by soldiers. They typically hold images of regiment group, individuals, places served, major events, and some even contain photographs of battle scenes, all captioned with names and memories. At first glance it might seem that their purpose is to celebrate their regiment and its history. A closer look gives me more the impression of a commemoration of the maker’s fellow soldiers, a way of remembering his experiences and the men who shared them with him, and maybe a desire for these not to be forgotten.

Joseph McEnroe is my name, Dublin is my station, 18 Kildare Street is my dwelling place, and Heaven is my Exportation. I hope when I am dead and gone, and all my bones are rotten, this postcard album will tell my name, when I am quite forgotten.
Joseph McEnroe 4/10/26
Late Royal Irish Fusiliers, ex prisoner of war in Germany, two years.

The role of the Irish soldier in World War I is explored in the Soldiers and Chiefs exhibition in Collins Barracks, which details the participation of about 150,000 Irishmen and women in the British Army and war service during the Great War.
The National Museum will open a new exhibition and hold a seminar day in late October 2014 to mark the centenary of World War I.