The last post on the blog looked at the experience of two Dublin brothers Thomas and Joseph McEnroe in World War I. Thomas had been a professional soldier from 1902, and his brother volunteered in 1916. It is estimated that about 350,000 Irish men and women served in this war in various roles. This photograph album is one of two extraordinary books compiled by a medical officer from Dublin, Lt Andrew John Horne, and was donated to the NMI by his daughters in early 2014.

Andrew was born in 1891 to a wealthy Catholic family. His father, Andrew J. Horne from Galway, was a physician and Fellow of the Royal College of Physicians and Royal Academy of Medicine of Ireland. In 1911 he, his wife Margaret and three adult children were living in 94 Merrion Square in Dublin, with young Andrew studying medicine in university. He was just 23 when war broke out in 1914, and he entered service as a medical officer with the 17th Stationary Hospital, which was attached to the 29th Division. His first album depicts his time in Gallipoli, Turkey, where he served during the disastrous campaign from April 1915, which saw about 180,000 Allied casualties. His hospital was established on a hill overlooking the peninsula and he managed to photograph the action from his vantage point, including shells exploding on the beaches. He was one of the five officers who were the last to leave the Gallipoli Peninsula on 9 January 1916, and went on to serve in Mesopotamia, Alexandria and India. After the war he spent time with the British Army in Malta (an established centre for the Royal Army Medical Corps), the Dardenelles, the Asian / Europe border and Istanbul, then known as Constantinople, where he made his second album. The album dates from early to mid 1923 and illustrates a very particular and turbulent time in the history of the city.

Constantinople was the capital of the powerful Ottoman Empire, but by the time war broke out in 1914 the empire was in major decline, having lost most of its territories in Europe and North Africa. It entered the war in November on the side of the Central Powers in an attempt to regain its lost empire. The Allied Powers considered Constantinople, with its location at the intersection between Europe and Asia, and its control of the route from the Aegean Sea to the Black Sea through the Bosphorus Strait, as one of the great prizes of the war. Russia claimed sovereignty, and Britain and France wanted to open the area to supply Russia via these sea routes. The Allies were already negotiating the division of Istanbul during the Gallipoli Campaign of 1915. Though the Ottomans saw some military successes during the war, the Allies victory in October 1918 and the subsequent armistice led to a five-year occupation of Turkish territories, including Constantinople, by British and French troops from November. Soon afterwards, the British Prime Minister Lloyd George encouraged Greece to pursue territories in the Ottoman Empire. Their invasion of 1919 led to the growth of the Turkish Nationalist Movement, with the remains of the Ottoman army led by the experienced World War I officer, Mustafa Kemal Atatürk. This conflict, known as the Turkish War of Independence, not only repelled the Greek invasion, it also ended the occupation of Constantinople and eventually led to the establishment of the Republic of Turkey.

By the time Andrew Horne arrived in Constantinople in 1923, the city was on the brink of huge change. Photographs in his album are a mix of a city under military occupation, with images of hospital ships and battleships on the Bosphorus alongside images of merchant ships transporting goods, a reminder of the economically strategic importance of the city and why its possession was so desirable.

Another image shows the railway station building at Haider Pasha on the Asian side on the city, underneath which is written ‘bombed and set on fire by our aeroplanes in the Great War’.

Some photographs show the recent modernization of Constantinople, for example the old Galata Bridge, with the electric tram which had replaced the horse trams in 1912.

Many of the photographs however, are of the typical sights of the city as seen by a visiting outsider. He photographs the Harem at Topkapi Palace from the river, and visits the Hagia Sophia, originally the Greek Orthodox church of St. Sophia and a functioning mosque when Andrew visited. Less than 10 years later it would close and become the museum it is today. 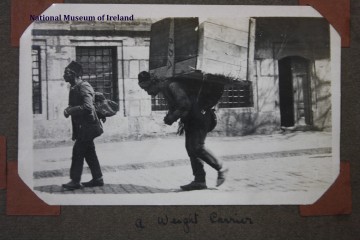 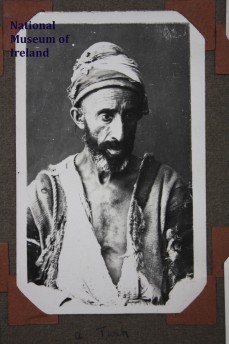 The city and its people must have seemed quite exotic to Andrew; he photographs men and women in traditional dress, workers and beggars in the streets.

One page of photographs shows people, labeled as Greek refugees from Asia, at a Constantinople port. This is a scene from the compulsory population exchange between Greece and Turkey in 1923, which saw the movement of about 2 million Greeks and Turkish Muslims between the two countries. The people in Andrew’s photograph, pictured with their household goods waiting to leave by boat, were some of the 1.5 million relocated to Greece after the Convention Concerning the Exchange of Greek and Turkish Populations was signed on 30 January 1923. This was to lead to the population of the newly formed Republic of Turkey to be almost 98% Muslim within a few years, though the country was to remain a secular state.

Although Andrew could not have known it, his photographs captured the last moments of Constantinople, the capital of an empire. A few months beforehand, the Ottoman Sultanate had been abolished, and the last Sultan had fled the country. A few months later, the occupation of the city was ended with the arrival of the Turkish Army, and the declaration of the Republic on 29 October 1923. Atatürk, the leader of the Provisional Government of Turkey, became its first president, and moved the capital to Ankara. Even the name Constantinople soon went out of use, as the city became the Istanbul we know today. 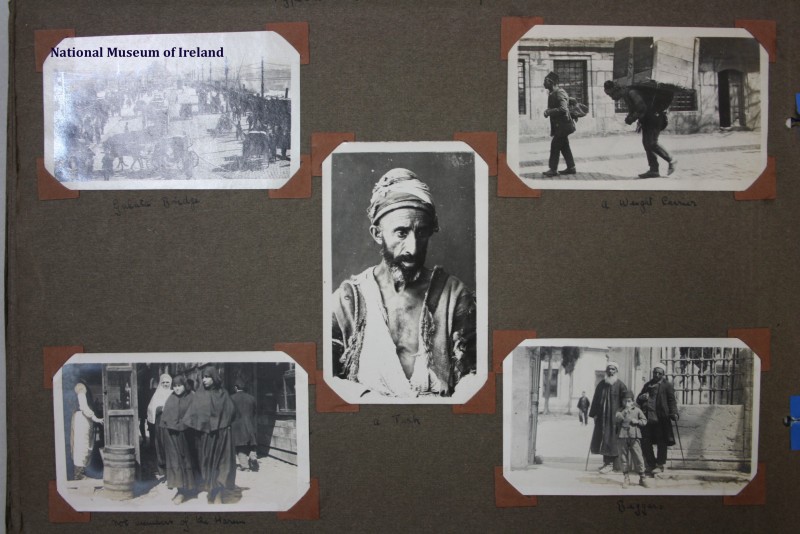 Lt Andrew Horne’s Gallipoli photograph album will be on display and fully viewable in digital format in the World War I Centenary exhibition in the National Museum of Ireland, Collin Barracks, opening end of November.

Towards a catalogue of London’s inter-dimensional gateways