A couple of previous posts have focused on the publishing of Republican material by Fergus O’Connor in Dublin, such as the Easter and St. Patrick’s Day greetings cards. While such cards saw no real obstacle to their movement, other publications by O’Connor were actively suppressed, making their distribution, particularly outside the country, much more difficult. These boots belonged to Harry Boland, envoy to the United States of America from 1919 to 1921, and were used to smuggle the document proclaiming Ireland’s Claim to Independence hidden in the soles. They were donated to the National Museum in 1935.

The Boland family had a long history of involvement in nationalist organisations and activities. Their paternal grandfather, a Fenian, had been part of the attack on the prison van transporting Irish Republican Brotherhood members Thomas Kelly and Timothy Deasy in Manchester in 1867. Later their father, James Boland, and mother had fled to America after the Phoenix Park murders of Lord Frederick Cavandish and Thomas Henry Burke in 1882, due to his supposed connections with The Invincibles, who carried out the murders. James was also friendly with well-known figures such as O’Donovan Rossa and P.W. Nally.  After his death, the family continued to be brought up in the nationalist traditions.

The three brothers, Gerald, Harry and Edmund, joined the Irish Volunteers at its inception at the Rotunda in late 1913 and took part in the Rising; Gerald in Jacob’s Factory and Harry and Edmund in the GPO.  After the surrender, Harry was arrested and sentenced to death, but his sentence was commuted to five years penal servitude and he was sent first to Dartmoor and then to Lewes Prison.

On his release in 1917, he opened a tailoring and outfitting business at 64 Middle Abbey Street, which became an important centre for dispatching information around the country. He was elected for South Roscommon in the 1918 General Election, and took his seat in the First Dáil in January 1919, where he was assigned as special envoy to the United States by Eamon de Valera. He spent the next three years campaigning for recognition of the Irish State, and also raising finances to help the effort at home.

In her statement to the Bureau of Military History, Kathleen Boland described her brother Harry’s secret journey. In mid May Harry went to Manchester to make preparations to go to America. He managed to get a job as a stoker on a steam ship, and arrived in New York on the 8th June, where he was met and brought safely through Customs by Jim McGee and Jim Gleeson, who were regularly engaged in the smuggling of weapons from America to Ireland. He was carrying a document, ‘Ireland’s Address to the Free Nations of the World’, otherwise known as Ireland’s Claim to Independence, which had been proclaimed at the First Dáil and published by Fergus O’Connor.  Due to its nature it had been suppressed by the British Government, and so had to be well concealed on the journey.

Harry had had a pair of stoker’s boot specially made with a hidden compartment in the soles in which he hid the document. When he reached New York he went directly to the home of Diarmuid (Dermot) Lynch, a member of Dáil Eireann for Cork South East, and National Secretary of The Friends of Irish Freedom, an organization dedicated to promoting Ireland’s cause in the United States. He ripped open the soles and delivered the document to Lynch, from where it was distributed to the Irish-American community. Lynch kept the boots and later donated them to the Museum. For more on Boland’s time in America, and the activities of Clan na Gael and The Friends of Irish Freedom, see the Further Reading section.

Harry Boland returned to Ireland in 1921, and, despite his close friendship with Michael Collins (which had survived even through their rivalry over Kitty Kiernan), took the side of the Anti-Treaty forces.  On 31 July 1922, one month into the Civil War, he was shot during an attempt by Free State troops to arrest him, and died two days later in hospital. When Kathleen asked him who had fired the shot he refused to tell her, saying ‘The only thing I’ll say is that it was a friend of my own that was in prison with me, I’ll never tell the name and don’t try to find out. I forgive him and I want no reprisals’. 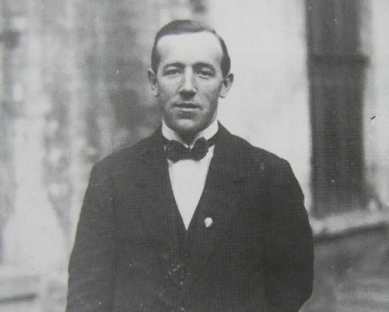 An old museum exhibition label for these boots talks about how they illustrate the difficulties in getting communications out between Ireland and America during this time. This is certainly true, but, like so many objects in the collection, they also represent the personal belief individuals had in Ireland’s right to independence, the risks they faced and the personal sacrifices they made to play a part in achieving it.