Today is National Famine Commemoration Day in Ireland, an event which has been held annually since 2009. Though it seems little remains of any material culture relating to the famine, the National Museum has a small number of ‘famine pots’; large iron pots used to cook soup in the kitchens set up by the Quaker community to feed the starving. A number of these pots survive around the country. Another object from the museum’s Historical Collections is this Indian meal ticket, issued by the Portlaw Relief District in Waterford to a Mr White, enabling him to purchase three stone of Indian meal for six pence. It was found in the Carrick Road area of Portlaw, and was given to the museum in 1952.

Ireland has seen much famine in its history, but the most well-known is the period between 1845 and 1852; the Great Famine. During its course it is estimated that between one and one and a half million people died of starvation and disease, and a further one million people emigrated. The 1841 census of Ireland had recorded eight million people, making the loss during these famine years at least 25%. The population continued to decline over the decades, and the pre-famine population levels were never again seen in Ireland.

The famine was caused primarily by the potato blight that caused the potato crops, on which so many Irish people were dependent, to fail in the autumn in 1845. Other crops were unaffected and Ireland continued to export food to England during the course of the famine, in many cases escorted under armed guard from famine stricken areas to the ports.

In November 1845 The Relief Commission was established to assess food shortages and the levels of distress in the country. At the same time, the British Prime Minister Robert Peel arranged the import of cheap Indian cornmeal, which could be sold at a reduced rate. Local relief committees were set up to raise funds, which would be partially matched by the Commission, to buy the cornmeal and sell it at cost price to poor families, as they were restricted from providing the meal for free to any person unless they were unfit for work but could not enter a poorhouse. The cornmeal didn’t arrive in Ireland until February 1946.

The Illustrated London News (4th April 1846) carried an artist’s sketch and account of the selling of the Indian meal in Cork.

‘On Saturday last, the Government Sales of Indian Corn and Meal commenced in Cork. Immediately on the depots being opened, the crowds of poor persons who gathered round them were so turbulently inclined as to require the immediate interference of the police, who remained there throughout the day.  Among the poor, who were of the humblest description, and needing charitable relief, the sales were but scanty. The occasion had become of necessity; for potatoes have risen to 11d market price for 14lbs.; and, some of the leading commercial men in Cork have made a calculation, which shows that the Government can afford to sell the Indian Corn at a much cheaper rate’.

The Indian meal posed its own problems though; it needed to be ground twice before it could be eaten so it required substantial processing.  Most importantly, it was a poor dietary substitute. The staple diet of potatoes that the poorer Irish were used to was quite nutritious, but the Indian meal lacked Vitamin C, leading to many people developing scurvy. However, the meal undoubtedly did help reduce the death rate by starvation in that year.

The supply of the meal was gone by June 1846, and Peel’s government had fallen, replaced by Charles Trevelyan. The potato crop continued to fail, no more Indian meal was purchased, and the famine continued and worsened.

This small ticket is not only one of the few surviving objects of the Great Famine, but an incredibly personal one. The Waterford area may not have been the worst afflicted by the famine, but the people there were affected. We don’t know who Mr White is, but this ticket, which must have been given to him in the first year of the famine, identifies him and his family as in need of the aid provided by the local relief committee. We will probably never know what happened to him in the following years, if he died during the famine, or had to emigrate. It’s also possible that he survived, perhaps with descendants still living in Waterford. 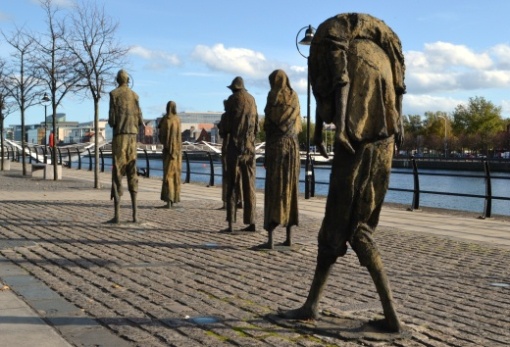